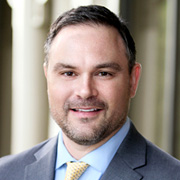 Jason deGroot currently serves as the Chief Financial Officer for the National Diversity Council (NDC) and has been with the organization since 2007. As Chief Financial Officer, he is responsible to the CEO and Board for all financial matters. He establishes the overall financial and administrative objectives, policies, programs, and practices which insure the organization’s sound financial structure. He also controls the cash flow in the organization and maintains the integrity of funds by both overseeing the accounting group and the annual external audit. Jason assisted the founder and CEO with the formation of the NDC and he ensured that the organization received and maintained its 501c3 Nonprofit Status.

In addition to his finance and administrative responsibilities, Jason also is responsible for business development and has been instrumental in membership growth of both the Texas market and other state councils throughout the country. When he first joined the organization back in 2007, Jason played an active role in developing the Florida Diversity Council. In addition, Jason has helped lead fundraising efforts for the NDC by securing sponsorships for the various programs and events of the organization.

Prior to the National Diversity Council, Jason worked as an accountant and financial analyst in the Tax Reporting and Analysis Center for Exxon Mobil Corporation. In this role, he was responsible for minimizing the tax liability for the organization in the upstream, downstream, and chemical sectors of the business. He was also responsible for compliance with both federal and state governments. Jason also led multiple teams within the group that focused on improving the internal processes and efficiency of the organization.

Prior to ExxonMobil, Jason was employed with Warren Electric Group. As a Supervisor for the Corporate Process and Systems Group, Jason worked to improve operational efficiency and gained widespread exposure to various departmental projects including: accounting, MIS, sales, purchasing, inventory control, and human resources. His experience in these areas assisted him with being responsible for improving synergy between all departments. He was also chosen to oversee several inventory projects in Trinidad, gaining valuable international business experience.

Jason graduated at the top of his class from the University of Houston with a degree in Finance. During this time, he received numerous academic and athletic awards. He also participated on the football team as a wide receiver and managed to maintain a perfect 4.0 grade point average at the Bauer College of Business. He is also active in several community and alumni associations, some of which he holds leadership roles. Jason currently resides in Houston, Texas with his wife Brandi and their three children Dayne, Dawson, and Delaney.